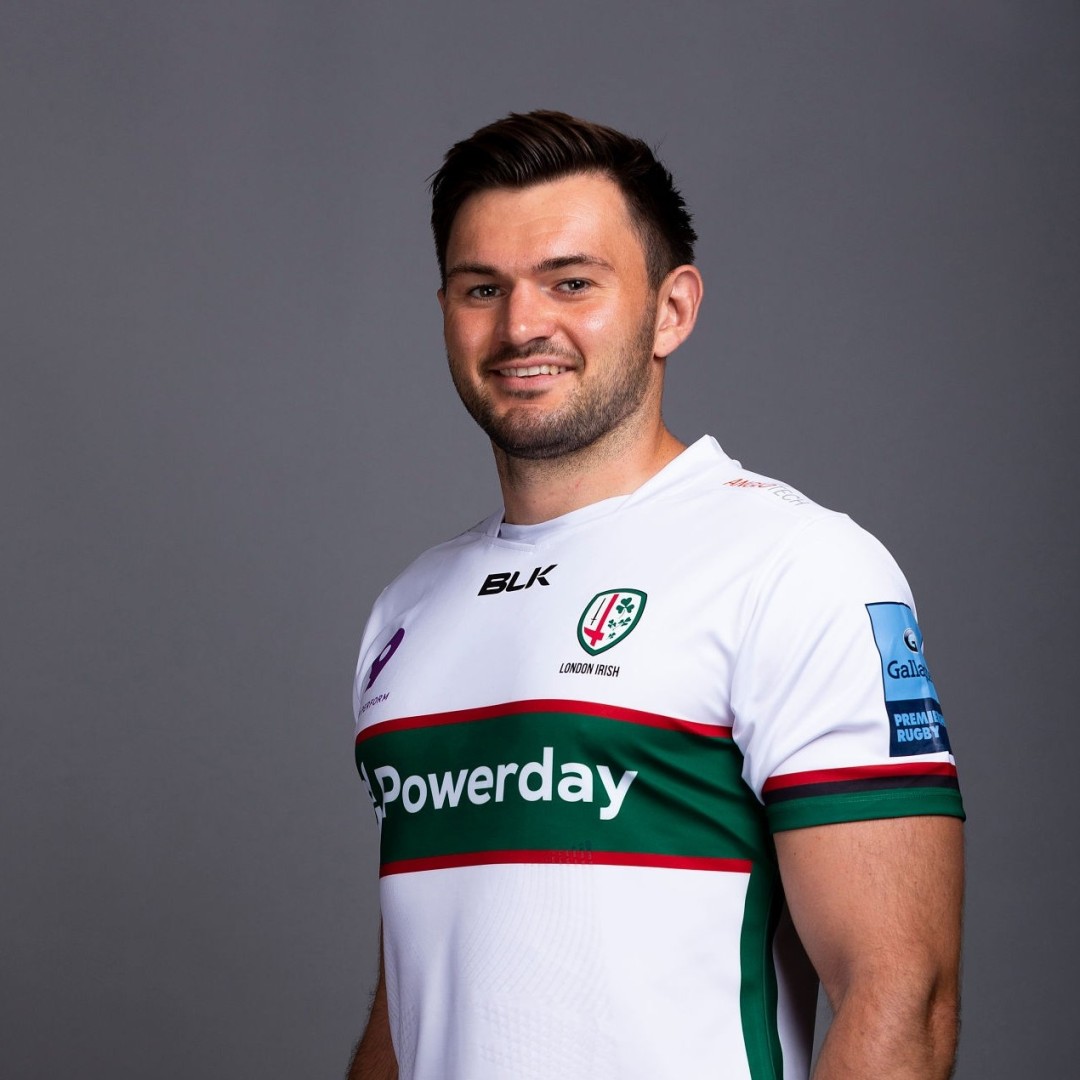 It’s been a heady time for London Irish fans, seeing their team win three games on the bounce before coming unstuck in a battling display against in form Wasps, this is the best rugby the Madejski has seen in some years! @RugbyLI caught up with bustling back row Matt Rogerson to talk through the weekend’s game and the preparation for Sale on Friday.

“Although we were a little bit disjointed in the first half I think going in at halftime with the lead was a big positive, even though we knew we could’ve done better!” Matt tells me as we catch up in midweek. “I think second half, they really turned the heat on us. We pretty much matched them physically and we were in the game for a large part of it, there’s just sort of a small patch, maybe 10 or 15 minutes, where they were able to get on top of us. A few clever kicks and things like that put them in behind us and it was difficult to recover after that.”

Clearly there are plenty of positives to take once the frustration at the result has passed. That frustration was typified by Danny Hobbs-Awoyemi taking to the field in the second half to make his 50th appearance, only to depart again a few short minutes later. Harry Elrington returned to the field to see out the game from loose head and earned the plaudits of his teammates. “Harry put in a monumental shift, as he always does, so to come back onto the pitch and try to get back into fifth gear again was tough! It was a fresh set of legs we missed out on and it did slow the momentum a bit but the main thing is that Danny’s okay!”

Rest and recuperation was the theme for Monday, giving the players a shortened week to get prepped for Friday’s away trip. The team returned to Hazelwood on Monday morning for massage and physio sessions. Rogerson is quick to point out that the coaches have managed the intensity of training early in the week, focusing on knowledge gains and reviews of game tape before bringing up the intensity as the week progresses.

Sale holds a lot of good memories for Matt. He made his first steps as a professional there, but he’s keenly aware that it will take a lot of hard work to add this game to the happy list. “They’re second in the table and really taking it to teams both home and away now, they’re obviously doing something right! So I guess the challenge for us is probably the physicality that they’ll bring, we already know they’re big physical pack up front, confrontational. They’ve had a lot of signings brought in this year, particularly South African guys that are renowned for the physicality f their game and they’re going to be coming at us hard. Equally they got pretty exciting back three as well who can fire shots all around the park. We’re expecting to have a battle on all fronts, across the whole park.”

“We’ve got to meet their level of physicality, exceed it really. Play with the confidence and intensity that we’ve had in the last three or four games and hopefully we’ll be onto a winner!”

After the game the team have a bit of a break, which for Matt is an opportunity to stick around in the north west to catch up with friends and family. Then it’s back in to prep for a trip down the M4 to Bath before the St Patricks Party paints Reading green one last time. “’I’ve only been involved in one myself, last year, but even that game which was in the championship was still probably my favourite game of the year. There were probably 10,000 plus in the crowd and hopefully we’ll get the same if not more this year. Loads stuff going on around the club in terms of the stalls that are set up and the live music… It creates a really good atmosphere for us as players and the fans seem to be enjoying it as well so yes, it’s really exciting to look forward to that game!”

As much as Hazelwood will be abuzz with planning for the end of the month it’s a busy place this week too as the London Irish lads share their space with England’s Red Roses who are preparing to take on Wales down the road at the Stoop on Saturday. “Hazelwood is a pretty diverse place, we get all sorts of teams here. It’s a credit to the staff and to the facilities we have that top teams like the Red Roses want to come and use what we are using on a day-to-day basis.”

“It’s nice seeing them around. One of their coaches, Scott Bemand, actually coached me back when I was at Loughborough so I caught up with him briefly this morning. It’s nice to see a familiar face and have a chat!” It’s a nice reminder of how closely interlinked the rugby community is!

Our thanks to Matt for giving up his time, to Andrew Hogan & Bill Pulling at London Irish for their continued support in arranging the interviews and to Matt Merritt for carrying them out!