With a big win over Hartpury last weekend and a potentially season defining game on Friday, we wanted to make our next @RugbyLI interview a special one and so we dialled up one of the breakout stars of the season and a member of our ever-impressive senior academy. Matt Williams has been exceptional in his appearances this season, growing in every game so we thought we’d find out how he has enjoyed the year!

Hi Matt, thanks for taking the time to talk to us. How is your day going?

I’ve just got back from Wellington. Some of the senior academy guys went down to speak to some of the London Irish under 16s who were there. Just chatting about what it takes going forward over the next couple of years for them to progress to being a professional rugby player. It’s a chance for us to give them any advice or help we can really.

That’s really good to hear Nice that you’re doing that on the day we announce next years senior academy intake too!

Yeah I just saw that. I don’t know those guys too well but I’ve seen them about the club over the past few weeks. From what I hear they’re a hard working bunch of lads so they’ll fit in very well next year.

As you’re coming to the end of your own time in the academy and transitioning into being a senior team member would you say there was much difference in the way you’re treated at the club?

It was a pretty easy transition coming from school into the senior academy. We have a different changing room but everyone is very open, there doesn’t feel like a hierarchy. The older players talk to the younger lads and give them advice, we all train together most of the time… I think it’s a very easy, a very good culture for the younger lads to come into. Better than other clubs I’m sure.

It was a comprehensive win for the team on Sunday against Hartpury. Although it wasn’t the best way to get on, how did you find your time on the pitch?

First of all, I’m really gutted for Stevo! He’s had a really good season for us, played some great rugby and it’s a shame that he got injured how he did. I don’t know all the details of it but I’m sure the medics at Irish will take good care of him and he’ll be back as soon as he can.

For me…. It’s a hard one coming off the bench early like that, but the boys were going well, our maul was going really well and we got a few tries early so it was easy for me playing off front-foot ball.

You’ve just returned from injury yourself, are you feeling back to 100% now?

Yeah, I’d say I’m fully back to fitness now. It happened up in Bedford, in warm up unfortunately. I hurt my ankle a little bit but I’ve worked hard to get back. It took about two months or so. I was fit for the game down in Cornwall but didn’t get used. Hopefully I’ll get a couple more appearances as the season comes to an end.

I’m sure everyone is chomping at the bit to get involved at Richmond on Friday!

There’s great competition in the squad. One of the difficulties this year in the Champ is that there haven’t actually been many games. With a big squad like ours not everyone can play each week so there’s massive competition for starting or bench places. Even when guys aren’t playing though they’re involved helping to prep the playing squad so for us it’s just a normal week.

Real high intensity and focus going into what could be a very big game for us!

It’s a short turnaround from last week’s game. Does that help maintain the intensity as you focus on the trip to Richmond?

I think I’d rather have a bit of a longer week, just because bodies wise everyone is a bit sore and there’s less time to recover.

We had a recovery day on Monday, our day off… then we trained Tuesday and Wednesday, well be in tomorrow.

So yeah, it’s a short turnaround but we prepped for Richmond on the week we didn’t have a game so we’re well prepared for them and while t’s beena  short week it’s been a sharp one too and everyone knows what is needed of them on Friday!

You’re listed as a centre but have spent a fair bit of your time out on the wing. Do you view yourself more as one position and does it matter that much to you where you play?

Growing up and over the past couple of years I’ve been a centre and I’ve enjoyed my time playing there. Obviously, an element of my game is being relatively quick, which helps playing on the wing. Declan and Les have said to me when I’ve been selected on the wing to just go out there and play a normal game.

I think it’s helped me. It’s helped me to learn and grow as a player, develop new skills – high ball work, positioning and things like that, so I think it has only been beneficial for me as a player and for my understanding of the game.

I still prefer centre but I’m very happy to play wherever they want to put me. 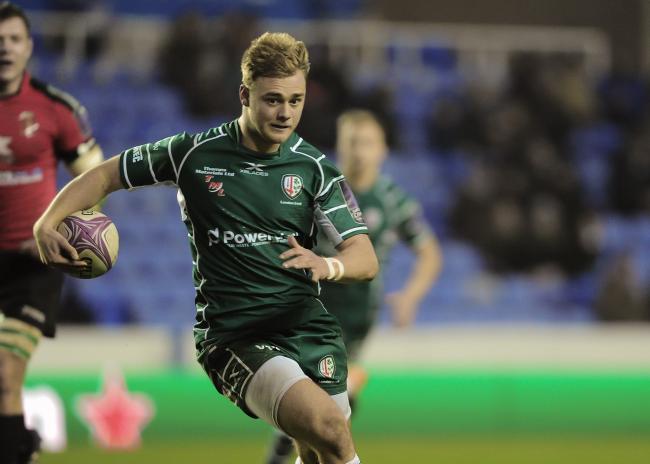 We talked to Jacob (Atkins) a few weeks ago and he mentioned how special it was to him not only to get first team minutes, but to do so alongside so many lads he has grown up with. You seem a really close knit group, does it feel as special for you guys as it does for us watching?

I hope so! I suppose it is a bit rare that we have so many lads coming through who have all played together from such a young age, lived together and, in the past, won things together, like the under 18s Premiership.

We are a close knit group and the goal is that in however many years we’re all still playing together and winning things together here!

Declan said “the only thing better than winning is winning with your friends”. That’s something we very much see as a goal for us!

That network of people you trust so implicitly must be a great help in tough times too, whether that getting through injuries or runs of bad results like we had last season.

There’s a great support network, not just our friends here at the club but the coaches the physios…I’s a great community and culture to be a part of!

Of course, it’s difficult when things aren’t going to plan but having friends there who you’ve got through similar situations alongside certainly helps.

Putting in the minutes with these lads over so many years must really pay dividends on the field too, I suppose you just know what Jacob is going to do at 10 or when Ben will make runs outside you…

Yeah, I’ve played with Dolly Parton since I was 11 or so, I played alomgside Benny at school… So I know what they want, what is expected of me and where I expect them to be. It does help playing minutes with people and getting those partnerships together. It can only benefit the team.

On the other end of the scale there’s guys like your centre partner at the weekend. Fergus got his 100th cap and guys like him or Topsy must be great resources for you lads to learn?

There is a brilliant, eclectic mix of people at the club. From young lads coming through to older heads who’ve been there and done that. It’s really good to have players like that, some still at the top of their game, to learn off.

People like Ian Keatley coming in or Stephen Myler just give you those little tips that are not ground-breaking but give you that extra one percent that can be the difference in a game!

We’re always interested in what players are up to outside the game. What takes up your time when you’re not training or playing?

I’m in my second year of university. I’m at Birkbeck in central London. It’s evening studies, I’m studying economics two or three evenings a week so at the moment I’m pretty snowed under, it’s taking up the majority of my time off the field!

The days we do get off I’m spending a lot of time working so it will be nice when summer comes around and they’ll all be done.

I believe you’re in the ‘palace’ this year? How does that compare to the 8 person house the younger lads are in?

Yeah, it’s a 5 person house, all of us in our final year. I’d say it’s one of, if not the, nicest academy house in the county. Right on the river, big spacious rooms… it’s great and I’ve loved living here!

It’s different to the 8 man but I think once lads have grafted through those first two years they deserve it!

Our thanks to Matt for giving up his time and to the club for their help arranging these interviews.