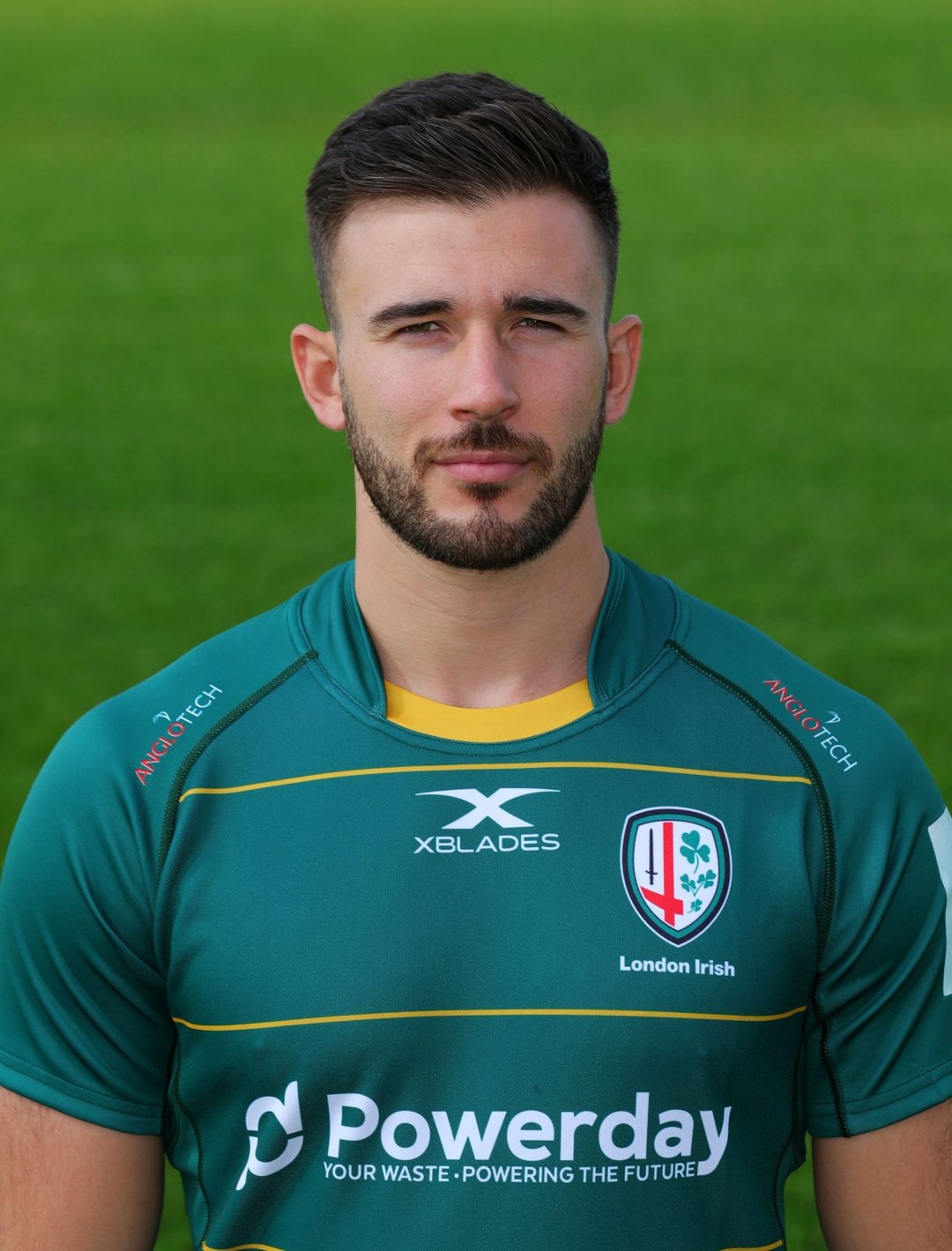 He was among the top 10 points scorers in the Premiership last season, despite missing the last couple of games. Sadly he’s still recuperating from what seemed at first like a pretty innocuous injury in the game against Exeter in April but as we’ll find out he’s been making sure to keep himself involved.

Matt Merritt from @RugbyLI caught up with Tommy Bell late last week to find out how he’s getting on and when we might see him back on the field.

Hey Tommy, how’s your day been?

It’s been busy, just got back from training. I’m coaching tonight down at Barnes in national 2, doing a bit of analysis. So I’ll do this and then head there. I’m doing a bit of stuff with the under 16’s tonight.

You put out a message offering some kicking coaching recently. Is that tied into what you’re doing with Barnes?

A bit yeah. It’s just something I quite enjoy. Being injured you do have a bit of free time. Some days – like this week, when the boys go to Jersey the weekend is free – you find yourself with a bit more time and it’s something to keep you busy. It’s a subject I’m quite passionate about so we’ll see where it goes really, see who I can help out.

You’ve mentioned your injury there, so I must ask; how is rehab going?

It’s coming on well. I had my first session on Tuesday in an AlterG machine. It’s basically an anti-gravity treadmill. You go in and put these special shorts on, the treadmill basically blows up. So I was able to run on the treadmill at 50% of my bodyweight. You’re in a special suit that lifts you up.

It means I can get running a bit sooner, start getting those running mechanics back. That was my first session getting to run again so it was quite low key, then we’ll build up over the next couple of weeks.

There’s no beating this injury, it’s not like a bad shoulder where you have to wait 12 weeks and think “I can push it, maybe be back in 10”. With the Achilles it needs time and a lot of the problem is the muscle wastage at the start of the injury from being in a boot so long. I didn’t move my foot at all for 7 weeks, not even up and down. It was just fixed in position for the tendon to heal back together. 7 weeks of doing nothing and the whole calf goes so it’s quite a long process of getting the muscle back. 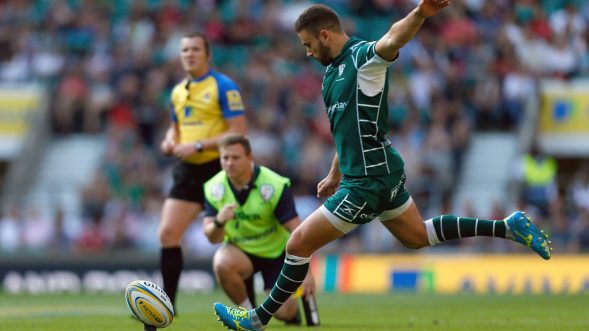 It must be a difficult time. Rugby is very much a team game and there’s a lot of talk about the camaraderie in the squad, does it affect you when you’re involved but almost on the outside of the squad?

Definitely! At the start we were going through a tough patch near the end of the season, still fighting for survival so it got me down because I wasn’t there with the team battling it out!

Then the summer was ruined really because I had my operation straight away, two days after it happening. I was able to make the end of season dinner on crutches, I’d just come out of the cast and into my boot at that point so it was nice to be able to get out of the house and get to the dinner, I’d basically spent two weeks were I lived out of two rooms – the kitchen and my bedroom – I wasn’t able to move around. They say for the first two weeks you need to spend 45 minutes of every hour laying down then you can get 10 minutes or so on your feet. It’s painful when you’re up so that wasn’t great!

Over the summer I had to cancel my holidays then I was straight into rehab while the boys were away. You find yourself a bit on the outside, especially at the start You’re immobile, you’re always with the physios or in the gym so you miss that camaraderie on the pitch and after training.

It wasn’t great but now it’s a lot better, the fitter I get. The coaches have been really good, they’ve got me involved in some of the weeks planning, looking at the opposition, doing a bit of analysis and feeding back to the team, trying to stay involved that way. Especially with the younger backs and the backs as a unit.

That must really help, being able to give something to help the team?

Yeah, it’s just staying engaged I think! If you just focus on the injury it becomes very boring, very repetitive so it’s nice having the games to focus on as well!

You can get caught up focusing on the injury and not focus on rugby as well, so I’ve tried to say as involved as I can with that side of things. I’ve kept up to date with our moves, our plays our strategies so I can still be learning and developing as a rugby player even though I’m not playing.

I’m sure the boys have been looking after you too.

The lads are awesome! A lot of the new boys have come in and fit straight in. This is my third season and there has always been a good bunch of boys.

There’s a lot going on outside the club, going for coffee after training and various other things so everyone is quite a close-knit group.

I’ve been getting a fair bit of stick for my calf, well for not having one really, so I’m working on it but the size is missing a bit. There’s daily banter on the calf size!

I just want to roll back now to earlier in your career as there’s something puzzling me. You’re from Plymouth originally aren’t you?

So how did you end up at Sale?

Basically, we moved up as a family, just north of Manchester, as my dad opened a gym up there. I would have been 16 then, so I did my schooling in a little town called Rossendale. I played a bit for Myerscough College which was a Sale AASE school so from there I went into the Sale Academy.

From there you spent a little time in the Championship after that before ending up at Wasps with your brother Chris, is that right?

Yeah, I did a year on loan from Sale – It was actually really good for me! I went to Sale, did two years in the Academy while I was at school and then a year full time out of school. They said to me one day during pre-season that Leeds were interested in taking me for the full year to play Champ rugby. I was 18 so I was like ‘Happy days, regular men’s rugby’!

I think I played 22 games that season and was lucky to play as much as I did. From there Wasps came in with a good opportunity so I went to them.

It must be nice to have that opportunity to play alongside a family member.

Yeah it was awesome! It was good to have him as a bit of a mentor, to be able to see him every day and train with him. He really helped to develop me. He always has my back, so it was awesome that we got to play together as well.

We never played against each other. I think there was one game I was on the bench for Leicester, but I didn’t get on in that game.

As you mentioned there you spent a bit of time at Leicester before joining London Irish where you formed a partnership with James Marshall, the two of you swapping between 10 and 15. Do you have any preference about which position you play?

I’ve sort of flickered a bit at all my clubs. I like playing 15 but I’m happy in both roles really but I think at 15 it gives me a bit more freedom to roam the pitch and be that second ball player, a second fly half on the pitch but further out. You get a bit more time and you can see the bigger picture.

Jimmy is a good player, he was good to play with. We were able to interlink, if he was at first receiver or whatever we could fit together nicely.

So are you targeting the 15 shirt on your return? With Myler at 10 that would be a nice combination!

I’m looking forward to it, I haven’t had any time training or anything.

Steve is a great player, he’s shown his class for a number of years now in the Premiership so that would be great but to be honest I haven’t really thought about it too much. You focus so much on the injury and getting back to fitness I haven’t really thought about being back fit. I want to push on now, the boys are playing well so I’ll have to earn my stripes a bit. If I can get back into training, train well then hopefully I’ll get a shot again.

Nothing is guaranteed, and the boys are playing really well at the minute!

Have you got a target now for when you hope to be back?

January time is the plan.

That’s quite nice timing for the league starting back up after a few weeks of cup games.

It’s one of those… When I did my Achilles – obviously there’s no good time to do it – if you had to pick a time, end of the season meant I missed a lot of pre-season but I’m getting that work in now as part of my rehab so I’ll only miss half the season and be back for the business end and that last little push.

It’ll be exciting. I just can’t wait to get back playing! When you get an injury this long…I find myself in the gym just staring out the window watching the boys train and wishing I was out there, but I’ll be back out there soon.

The weather looks like it is going to get pretty grim so you can be smug in the warm and dry while they’re outside!

Yeah, I know! I can enjoy a nice Christmas and be back out there in January. Hopefully I’ll be back running in December and I’ll have a lot of fitness work on my own getting myself up to speed before I can join in with first team training so I’ll be in for a tough winter, but I can’t wait to get out there to be honest!

We’re all excited to see you back out there in a green shirt Tommy so hopefully it isn’t too much longer.

I’m on the back end of the injury now and the end is in sight, so not too much longer!

Big thanks to Tommy for his time and his openness. As always we’re very thankful to London Irish and Stewart McCullough for their ongoing support too.