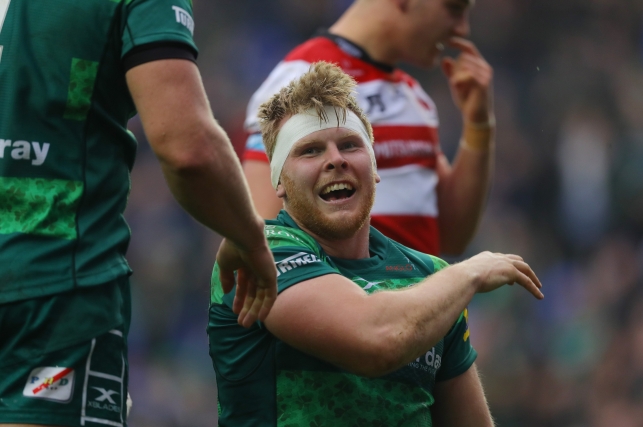 Two weeks of the season gone, two wins on the board and 2nd place in the table. It’s shaping up to be a pretty good season so far and we wanted to find out if the players are feeling just as positive so we turned to fan favourite and current captain Josh McNally for his thoughts on the last game, team socials and his other career.

So Josh, another win on the weekend and you bagged a try yourself. How’re you feeling today?

It was pretty good I think. There were quite a few areas we wanted to sharpen up from last week and I think we did that. We wanted to get back to basics, do those basic things well and assert a dominance. I think we did that, but we did let Nottingham back into the game in the last 10 minutes. In our eyes I think the game was pretty much done at that point and maybe it was a bit sloppy of us but still to get 5 points was a decent outcome. We set a target of 8 points at the start of the season for these two games and we’ve got 9 so we’re pretty happy!

You mention there about letting Nottingham back in when we were well ahead. How difficult is it to keep your finger on the pulse in those situations?

It is tough, it’s something we’ll build into I think as we get better as a group. We’re still early on in our journey and I think that can be when we can really throttle down teams and be solid for 80 minutes, but when you’re 40 points clear it can be tough to keep that 100% mentality.

It’s something I think we can do but after last week being quite a close game it was nice to just see the game run out and get that win. It’s something we definitely want to work on because we don’t want to let teams come back and get a sniff at us!

You’ve found yourself in the back row for the past couple of games, do you have any preference whether you play there or at lock?

I’ve always played lock. It was only last year when we had a few injuries in the back row that I made the transition. I still want to play in the second row but at the moment 6 is my position and I’ll do whatever I can for this team on the park. I’ll play wherever. We seem to be going quite well, we’ve got a good dynamic in the pack and I’ll happily play 6 for as long as I’m needed. I think it’s a good dynamic that I can move into the second row like I did yesterday. It gives the coaches nice options.

I’m just enjoying playing rugby really, so I don’t have a preference. 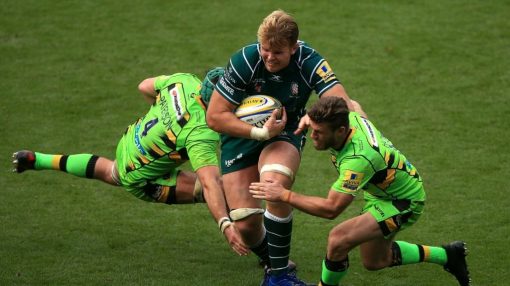 That versatility seems to be something that Declan and Les really value. As well as you moving between the rows we’ve seen Ben Meehan step up to 10. Is that something you’ve worked on a lot in pre-season?

Yeah, I think so. Declan has these ideas that anything could happen and we need to be able to adapt to it. With only having 22 in the match day squad we lose that outside back so having those guys, like Scott Steele who played a bit on the wing in pre-season and did a good job, having that versatility in the backline means we can still have 5 forwards on the bench which we need so having 2 backs and we can be covered pretty much everywhere is what we need. Having guys who are just generally good rugby players is key to that!

You’ve captained the team for the past couple of games as well, how did it feel running out at the Madejski yesterday at the head of the team?

It’s always nice to be back at your home ground. It seems like forever since we were last there 4, 5 months ago… Obviously two away games in pre-season and the first game at Ealing was away so it was nice to get back.

MadStad is a great ground with great fans. It’s nice to be back out on your home turf. It’s a real emphasis for us this year to turn the MadStad into a fortress, we don’t intend to lose there this year at all and we started that pretty well yesterday!

There’s no game next week due to the fixture change with Jersey. Is that an opportunity for you guys to get a break or do you use that time to work on new things?

It’s a bit of everything, it gives us a chance to have a bit of a rest, some of the boys have played a lot of minutes in the last 4 weeks, we don’t have training tomorrow so that’s an added bit of rest. But we’re going to be in next week, we’ve still got loads of things to work on from this week and last week.  We’re not a completely polished act so we’ll keep grinding on and keep working.

It’s quite nice to have a 2 week build up into the next home game, it’s a bit of a weird one to have a week off in round 3 but it’s not the end of the world and it gives us a chance to freshen up and get a good run in to the Bedford game.

Looking at the table we’re pretty close to the top. Cornish Pirates got a bonus point again today so they’re sat ahead of us… Are you looking to that top spot already or is that something you’re not paying attention to at the moment?

We want to be at the top, but its early doors. Having Ealing at the start of the season was a tough game so anything could have happened there. As the weeks go on we’ll aim to get into that top spot and stay there. Hopefully we’ll get a bit of daylight if we keep up the performances we’ve been doing.

We’re not really too focused, we’re all about the performances and as long as they’re good the results will follow. If the results follow then the league will look good.

We’ll keep ploughing away, obviously the table is in the back of our minds but we just want to keep playing and playing well!

It looked like you had a bit of a social last night! It must be good to be able to get out this early in the season and blow off some steam…

Yeah, with a couple of days off it was a good chance to blow the cobwebs out. We’ve got a few new guys in and we welcomed them into the squad properly. Scott Steele and Sebastian (de Chaves) have taken over the social committee so it was a good debut for them and a nice relax to blow off some steam. We had a good turnout last night and really good laugh!

Looking at the other side of your rugby career, representing the RAF, there’s a big game at Gloucester this year against the Army I believe? 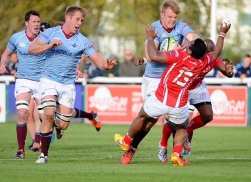 There is yeah, we’re trying to get the game on a bigger stage. The Army v Navy game is almost a joke now how big that is and the RAF want a piece of the pie really! We played at the Stoop last year for a bit of a stepping stone into that bigger stage and also for the RAF 100. I think we’ve got the Stoop again this year against the Navy and then we play the Army at Kingsholm so getting back into the bigger stages and the right direction. I’m looking forward to it!

You’ll be looking to keep hold of the Inter-Services title too, I’m sure!

Yeah definitely! It’s fantastic now that it’s so competitive. My first years playing for the RAF we were getting hosed by 50 or 60 points but now you can’t really call it each year. All the teams work hard from January building up a good squad and it does come down to those games. It’s a real battle of attrition and a physical test. It was good to come out on top last year and no doubt the Army and Navy will step up their game and it will be an even tougher tournament. But it’ll be good to be at Kingsholm and hopefully we can retain the title!

Yeah, it’s great to see a lot of the Army guys in the Championship now. I’ve been playing with a lot of these guys for a long time now, this will be my 8th or 9th season so you build up a good battle and contest with a lot of these guys and it’s quite nice, you only see them once a year and have a really good test. It’ll be good to see Senitiki, hopefully he can stay fit this year because I think he’ll have a really good year!

I suppose the RAF must view this as a way to really encourage people into a Forces career too.

Yeah definitely, we’re actually looking into how we can get a pathway for professional rugby players into the military. If rugby doesn’t work out or lads want life after rugby the military is a great career, so for academy guys if rugby doesn’t pan out there is a rugby window there. It’s a very similar environment to a rugby team so quite suited to guys finishing in the game.

It’s definitely done a lot for me, I wouldn’t be playing professional rugby if not for the RAF so it’s a very good career and I’ve loved my time. Hopefully I’ll have a great career after I’ve played rugby.

Thanks for your time Josh, it’s really appreciated! Before we go, the Supporters Club celebrate their 20th anniversary this year. Do you have any message for the supporters you’d like to share?

They’ve been fantastic! The amount that turned out at Ealing last week and at the MadStad this week has been unbelievable. They’re such a passionate bunch of supporters and they really help us get over the line.

Having so many down at Ealing last week… they out voiced the Ealing fans and made it feel like a home game so it was good and spurred us on when we needed it in the second half!

It’s been a tough couple of years bouncing between leagues and it’s amazing so many have stuck with us and now we’re starting this new journey that will hopefully take us back to where we were 10, 15 years ago.

We applaud you for staying with us and hopefully we’ll get back to where we belong in the Premiership.

Our thanks to Josh and to the team at London Irish for all their support.  As always this interview was conducted by Matt Merritt and @RugbyLI.