After 20 years of bringing together London Irish fans and organising different events to bring them closer to the team, here’s something a little different for LISC. Matt Merritt of the Twitter account @RugbyLI brings the first in what will hopefully become a series of interviews with the players throughout the season. In this one, we talk about how pre-season training has gone, what the road ahead looks like with Petrus du Plessis.

So Petrus, you’re just coming to the end of pre-season, how are you feeling?

How do I feel? I feel great! We had a very good pre-season, a little bit different to last year with regard to the structure of how we trained but it’s worked out pretty well this year. I personally feel a lot fitter, I’ve lost a lot of fat and gained muscle so my stats look better and I think that’s down to the coaches and the hard work they’ve put in and the structure we follow. So that was pretty good!

For the rest of the squad, I think they look extremely fit, the figures are getting better and better every year, personally I think we’re in a better place than we might have been last pre-season.

That’s great to hear! There have been 9 new signings this summer, are they integrating into the squad okay?

Yeah, really well. I was saying to someone before, most of them came from other clubs where they’ve had mates who are playing for this club already so I think the transition for them is quite good, they’ve settled in really well. I can only speak for the forwards mainly, but the new forwards that have come in have really put their bodies on the line and shifted some weights so I think they’re slotting in really well. I think it can only strengthen us and the signings mean we’ve got a lot of depth now and I think that’s what you need. You need to start building depth in the Championship so that if we – not thinking too far – but if we get promoted back to the Prem then you’ve already got that structure in place, not like the last time maybe where the play offs hindered some ambitions. 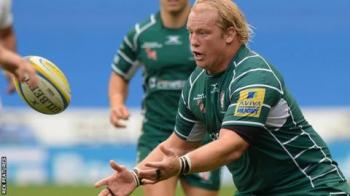 I was going to ask, do you think not having to go through the play-offs will make a difference for the promoted team? We’ve seen how Bristol recruited…

It must do, I think personally for any club who are top of the Championship to then have to go play in the playoffs that finish at the end of May is ridiculous so it’s a good job they got rid of that. We’ll see how Bristol get on this year. They got promoted by, say, March which gave them loads of chance to recruit and build so if they do well this year that’ll show that it’s a structure that works.

Now you’ve played in the Championship before, earlier in your career. Looking at it now does it seem like a similar tournament or has it changed?

I’ve spoken to a lot of guys who’ve played Championship maybe not so long ago… I always felt that it was extremely physical, maybe a little slower, maybe in certain games with muddier pitches more forwards oriented and it seems to me that it’s still similar. I’ve spoken to a couple of refs and they say even teams like Bristol struggled in the front row and the maul against teams who were very oriented toward the set piece so therefore that is going to be a great challenge for us! I think the way that we play, with the depth that we have, it will be hard at certain away games but we should benefit from the rewards if we do what we’ve planned to do.

There’s a lot of teams in this league you won’t have played against before, or won’t have seen for a long time. Are there any games you’re looking forward to?

It will be good to go to Nottingham. I was there for nine months before I went to the Premiership so it will be great to go to Nottingham to see how they’ve developed in the 9, ten years almost. Then places like Leeds, Doncaster, places where there’s a rich history of Championship r

ugby. I remember playing in Penzance many years ago and I got my only card – a red card – for something I got let off for the next week. Just a misinterpretation of the use of a boot…

Thinking about some of the younger players in the squad, we’ve got a really strong academy that Irish have always been proud of. Have any of the young players caught your eye in pre-season and who should we keep an eye on this year?

Well firstly there were, if I’m not mistaken, 10 senior academy players involved in the under 20’s and other ages, so if you break down all the premiership teams that make up those squads London Irish were quite strong there. I think that in itself shows the academy is doing a very good job.

Up front Ben Atkins has been thrown in at hooker at what, 18 years old? He had his first live scrum session with us and he seems to have come out of that unscathed!

Ben Loader is a fantastic player who made his debut last year against Bath and scored a try, so there’s a lot of talent that I’d say will come through… There’s too many to name actually but for me those two, let’s keep an eye on them, amongst others!

Great, thanks. Just to close up, it’s the 20th anniversary for the London Irish Supporters Club this year, so a big year for us. How important is it to have a strong supporter base around the club?

I think it’s vital! I think the supporters make up most of the clubs atmosphere at games and keep the players wanting to strive for more. A club like London Irish has a very rich history – I think they’ve been around since what is it 1886 (it’s actually 1898, but I wasn’t sure either) – we talked about that in our meetings, we talked about the Exile, the history of the club and what it means to us.

So keep on supporting keep doing what you’re doing. It really shows on game day, for example of St Patricks Day we really notice the crowd and it’s really good for us!

A big thank you to Petrus for his time and to Stewart McCullough at London Irish for all his support in arranging this interview.