Topsy Ojo was born in July 1985 in Tottenham, London.

Topsy joined London Irish academy back in 2003 and made his first team debut in October 2005, a Powergen Cup match against Wasps – the first of Topsy’s many tries for London Irish came in this match.

One of a rare-breed these days, Topsy is a one club man and in a career spanning 16 years he has taken the record for both the greatest number of first team appearances and top try scorer for London Irish.

Topsy’s final tally for London Irish is 301 appearances and 80 tries.

There are many highlights to Topsy’s London Irish career, including scoring in the 2008 Heineken Cup Semi-Final against Toulouse at Twickenham and many will recall his try against Munster at the Madejski in 2010.

Topsy represented England at both Saxons and Full International level, winning 2 caps for both sides. Topsy’s England debut was against New Zealand on the 2008 tour, he scored 2 tries in the match.

Topsy will remain involved with London Irish as he takes on a new role as a club ambassador as we prepare for the move back to London in 2020.

We are sure that all London Irish supporters will want to join us in wishing Topsy and his family all the best for the future. 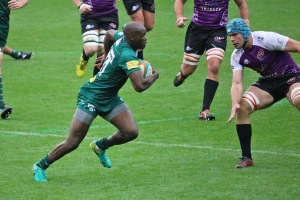 Information used on this page has been sourced from Wikipedia & London Irish – if you spot any inaccuracies or have additional information, please let our webmaster know.